On Oct. 18, Prime Therapeutics (Prime) celebrated its Beyond the Yellow Ribbon (BTYR) designation, previously announced in 2021, with a formal proclamation ceremony. Prime earned the BTYR honor by creating a sustainable action plan demonstrating its support of service members and military families. Prime laid the groundwork for this certification by launching an employee resource group for military affiliated employees and improving its military leave policy. 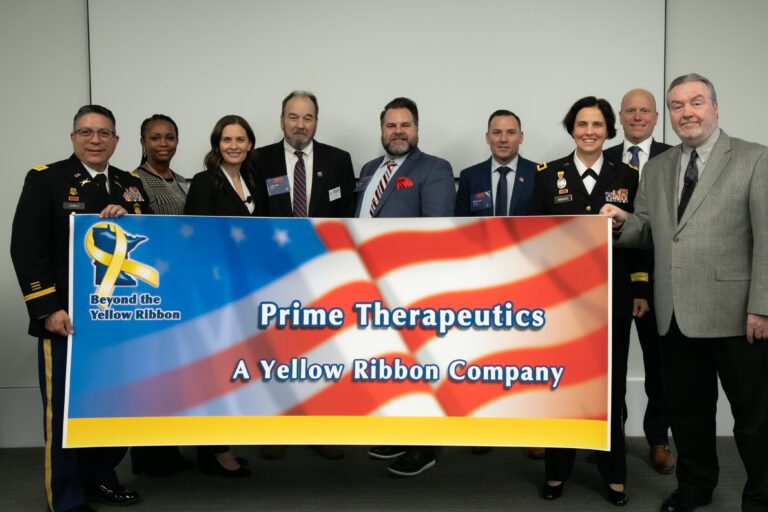 Congresswoman Angie Craig, who represents Eagan, Minn., where Prime is headquartered, attended the ceremony. Rep. Craig shared the value Prime adds to the community as a Yellow Ribbon company. “We owe such a debt of gratitude to the men and women who serve our nation,” Rep. Craig said. “When they return home, we have a responsibility to make sure that they are cared for. Prime Therapeutics plays a critical role in helping to do just that, whether it’s launching a veteran’s resource group or implementing a military leave policy.”

General Horvath shared how often it is challenging to balance family and work life, in addition to military commitments, so employer support through policies like Prime’s are priceless. “There is nothing better than a community that takes care of its service members,” said General Horvath. “Everything you do does impact service members; and so, subsequently does impact our national defenses and our national strength.”

Marcus Caruso, director, network compliance for Prime and ARMY Reserve Master Sergeant said he is proud to work for a company that supports the military. He is especially grateful for Prime’s military leave benefit that allows time off to transition from active service to returning to work. Caruso said, “Prime is now a company that says, ‘We recognize you; we want you and we’re ready to invest in you,’ to all the newly transitioned military personnel.” Caruso added, “I’m very proud to be working for a company that is willing to invest in me and so many people like me.”

See Prime’s 2022 DEI Annual Transparency Report to learn how Prime’s commitment to diversity, equity and inclusion (DEI) is rooted in its collective values as a company and inseparable from its purpose and dedication to serving others.

Prime Therapeutics named to the list of Healthiest Employers of Minnesota

Prime Together Foundation gives to Jeremiah Program, giving young moms space to dream big for themselves, their kids and community