Harvoni, as a cure for hepatitis C, has been on the market since 2013. But not much real-world data has focused on laboratory cure confirmation results (i.e., achieving sustained virologic response) along with a treatment persistence assessment. This study does.

What was the study about?

Hepatitis C treatment is expensive and complex. It can have severe side effects. It requires commitment from the member to start, follow and complete the therapy. This study analyzed treatment completion/cure rates, as measured by sustained virologic response (SVR) in laboratory results. The SVR is used to determine whether the treatment response — the cure — is sustained weeks after treatment is complete.

Nearly all the commercially insured members (97 percent) who completed at least eight weeks of hepatitis C treatment with Gilead’s Harvoni® (ledipasvir/sofosbuvir) were cured of the disease. The results are similar to clinical trial data, which found cure rates of 94 to 99 percent.

For the study, Prime researchers reviewed data from 311 commercially insured individuals who received at least eight weeks of Harvoni therapy and provided a sustained virologic response (SVR) test result to the pharmacy between 12 to 24 weeks following Harvoni use.

SVR rates by weeks of therapy 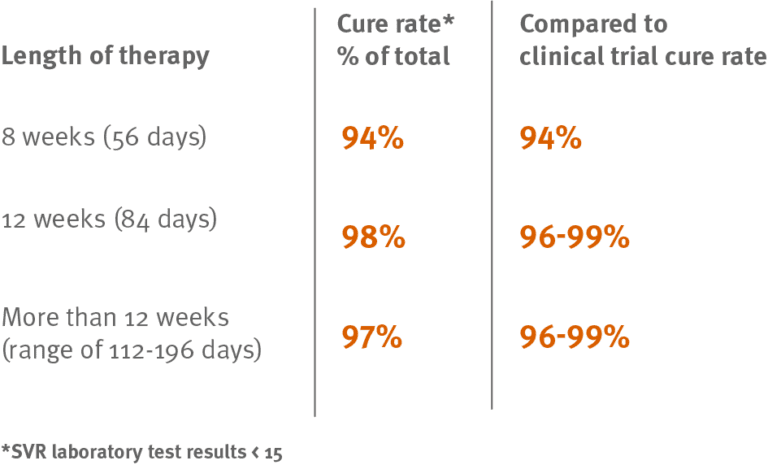 This real world data analysis found members treated for hepatitis C virus with Harvoni through the Prime Therapeutics Specialty Pharmacy had cure rates equivalent to those reported in the clinical trial data. This finding supports both Harvoni real world effectiveness and the value of using a specialty pharmacy for hepatitis C treatment.

Plan sponsors should make sure all members taking specialty medicines have the care management services of an accredited specialty pharmacy supporting them throughout their treatment plans.

Drug names are the property of their respective owners.