Real-world data on MS, adherence to DMDs and relapse rates

What were these studies about?

MS is a chronic autoimmune disease of the central nervous system. Damage to nerve fibers accumulates over decades and can become disabling. Drugs that treat MS (and other autoimmune diseases) are a leading driver of pharmacy benefit costs.

MS has four different disease classifications that differ in both progression and treatment. An estimated 400,000 Americans have MS. Drug therapy for this potentially disabling disease can carry a price tag of more than $80,000 per year (wholesale acquisition cost or WAC).1

More than a dozen medications treat MS, but few studies look at the total cost of care and then break down costs of treatment by adherence and relapse rates.

Two-thirds of members with MS had claims for a DMD in the first study. Of those, 60 percent were adherent over three years (proportion of days covered [PDC] of 80 percent or above). Adherent members had about a quarter lower risk of having at least one relapse over three years.

Methods for the first study

From a population of 15 million commercially insured members across the United States, we looked for continuously eligible members over a four-year period (2013-2016). Members with MS were defined by claims with an MS medical diagnosis code or a DMD pharmacy claim. The final study group for the first study contained 8,356 members.

Medical costs were broken down. Total cost of care was summed and compared to a matched group of members without MS. Cost and adherence was broken down by DMD. 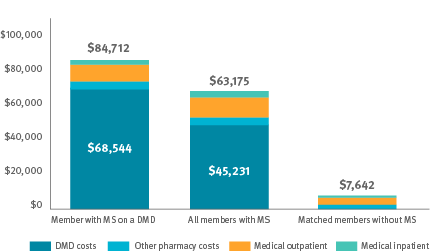 Methods for the second study

The second study used the same groups of adherent and nonadherent members with MS. Then we looked at medical claims for indication of relapses. Relapses were defined by hospital inpatient stays and/or two medications given to treat relapses. The average medical expense per MS relapse was $9,000.

Those members had $16,168 in medical expense not for DMDs and other pharmacy, non DMD, costs. The largest individual categories within that were for MRIs, dalfampridine (a drug approved to improve walking), inpatient hospital stays and office visits.

Adherence: In the three-year follow-up period, 60 percent of the members taking a DMD remained adherent.

The second study shows that DMD adherence is associated with a decrease in the incidence of relapses. A crucial goal of MS treatment: to help stall or slow disease progression.

To prevent one MS relapse in one member, it would be necessary to improve DMD adherence for 15 nonadherent members for three years. This would cost $3 million in new pharmacy spend.

The use of DMDs is not offset by a reduction in medical expenses, at least in the short term. It is not possible to get a direct medical cost offset ROI from improving adherence.

The value of treating more MS members with DMDs or improving adherence needs to be assessed from a societal perspective and with a time horizon of many years.

Since there are many medications available to treat MS, utilization management and preferred products can reduce the cost of care for MS. Use of an exclusive, accredited specialty pharmacy may provide improved care management, adherence and cost controls. These real-world findings quantify the treatment gaps associated with DMD adherence. They also confirm that the majority of MS care are pharmacy costs. These factors can be used to negotiate value-based contracts and develop pharmacist-care service offerings.