Never again should you doubt the power of benefit design 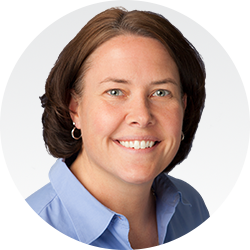 In most cases, less is more.

Opioids are often prescribed for relief of acute pain, like following an injury or outpatient surgery. Evidence shows that (most of the time) a three-day opioid prescription will be sufficient. Industry experts from the Centers for Disease Control (2016) have provided these guidelines.¹ Many states have passed laws supporting these guidelines.²

As these guidelines have become more well known, doctors started to change their opioid prescribing behaviors. Fewer long prescriptions. More prescriptions for less than a week.

Yes. A point of sale edit made the difference. 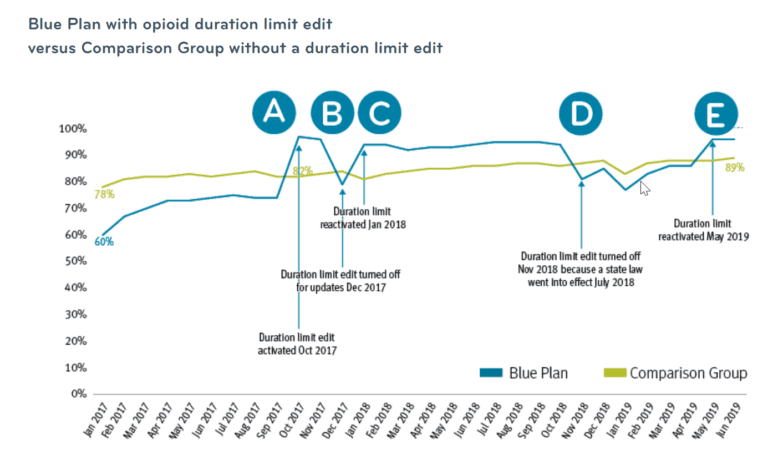 Two months after it started, the duration limit edit was briefly turned off for some administrative updates. The rate dropped 18 points very quickly.B But when it was turned back on, the rate bounced right back up.C Then, the Blue Plan rate held in the mid 90th percentile for most of the next year.

This Blue Plan client also learned the difference in effectiveness between a point of sale edit and state law.

In 2018, that state government passed a law requiring shorter opioid prescriptions for members new to opioids. The Blue Plan decided to turn off the point of sale edit.D Wouldn’t the state law accomplish the same objective?

No, it didn’t. The percentage of short day supply opioid prescriptions dropped back into the 70s again.

So, a few months later the Blue Plan put the edit back into place. The short days supply rate bounced back up into the mid 90s again.E

These findings are one small part of the research parsed from 30 months of pharmacy claims data studying a 2 million member group with a 1.6 million member comparison group.

This point of sale edit is just one example of many Prime offerings that help health plans control potential opioid misuse and abuse. Learn more about Prime’s commitment to controlled substance management.