Rewrite the textbooks: treating disease has been turned inside out 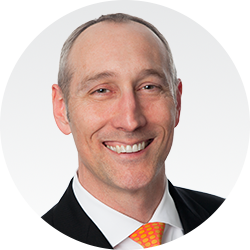 In the broad sense, gene therapy harnesses the body’s own innate capacity to heal itself.

Kymriah™ was first in September 2017. Yescarta™ followed in October. We expect to see Luxturna™ approved in January 2018 or earlier. Decades of research by hundreds of scientists contributed to the development of these drugs. This article will take a closer look at the development process – the long pipeline – from which these drugs emerged.

The first gene therapy trial was done at the National Institutes of Health (NIH) Clinical Center in 1990.1 White blood cells were removed from a young girl with adenosine deaminase (ADA) deficiency, a genetic disease which left her defenseless against infections. Healthy genes for making ADA were added to the white blood cells in the lab. The corrected white blood cells were reinfused. She received repeated treatments over two years and fully recovered. Today, she is a thriving millennial.

It’s been a bumpy ride

The clinical trials for these gene therapy drugs have been tough. There is still a lot to learn.

In 2000, just 10 years after the first success at the NIH – several patient deaths in gene therapy trials attracted media attention. Nearly 700 reports of serious adverse events (serious deteriorations or deaths) were submitted to the FDA and the NIH. But those reports were submitted late. The delay indicated that some researchers may not have been following guidelines.

Gene therapy is normally carried out on terminally ill patients. Those deaths may have been caused by the treatment technique, by the original condition, by treatment side effects or something else entirely. The purpose of the NIH reporting was to share data with other scientists conducting similar research to move the technology forward. “It is important to make these reports promptly so that appropriate measures can be taken by other researchers to safeguard the health of their patients,” said an NIH official.2

Another dozen years later, in 2012, seven-year-old Emily Whitehead of Philipsburg, PA, was the first person to try what is now called Kymriah. Her leukemia went into complete remission within three weeks of treatment.3 Clinical trials continued, and the FDA approved Kymriah in September of 2017.

Doctors aren’t known for effusive language, but their comments around the launch of Kymriah provide a hint of the potential they see in gene therapy. 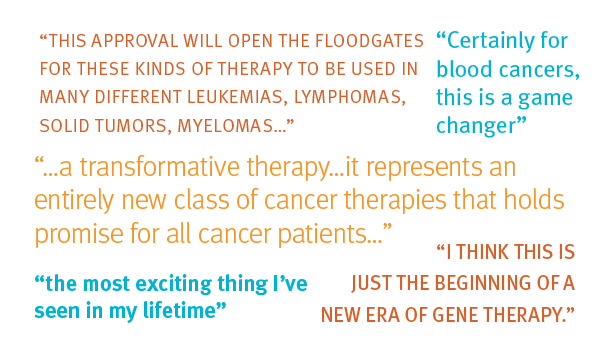 “Certainly for blood cancers, this is a game changer,” said Stephan A. Grupp, director of the cancer immunotherapy program at Childrens’ Hospital of Philadelphia.3

“This approval will open the floodgates for these kinds of therapy to be used in many different leukemias, lymphomas, solid tumors, myelomas,” said Dr. Prakash Satwani, a pediatric hematologist-oncologist at Columbia University Medical Center. “I think this is just the beginning of a new era of gene therapy.”4

FDA Commissioner Scott Gottlieb, predicted that this new approach to cancer treatment will “change the face of modern medicine.” Gottlieb himself is a survivor of blood cancer.3

One member of the FDA advisory committee called it “the most exciting thing I’ve seen in my lifetime” for childhood leukemia.”4

Trials continued and the field developed

Certainly, optimism around CAR-T therapy has increased, but it’s still a slow process with setbacks. In 2016, the FDA stopped clinical trials of another CAR-T therapy, from Juno Therapeutics. Designed to treat ALL, JCAR015 caused fatal cerebral edemas in three patients.5

Then in September 2017, the French biopharmaceutical company Cellectis had two phase 1 trials of CAR-T drugs stopped, following the death of one patient. Cellectis is working with the FDA to redesign the study. Cellectis drugs are “off-the-shelf” CAR-T drugs. This means that they don’t use a patient’s own T-cells, but instead collect T-cells from donors.5 The Cellectis offerings may continue testing at another point.

“These are very potent drugs, good and bad,” said Sandip Patel, medical oncologist and assistant professor of medicine at the U.C. San Diego Moores Cancer Center, in a phone interview. “…people can die from the side effects.”6

People dying to try anything

Research shows that 61 percent of American adults look online for health information.7 Websites for cancers and conditions provide consumers with a range of information. The websites cover causes, symptoms, treatments and support groups. And they display information on how to find out about clinical trials for treatments in development. Often they include information on complementary and alternative medicines. 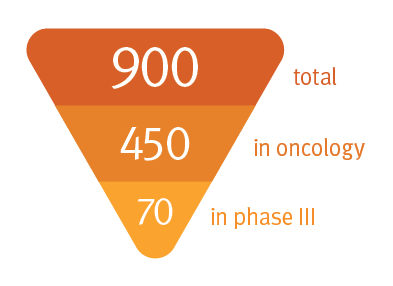 This is the future

With science advancing at such a rapid rate, how will plan sponsors ensure these treatments are used in the most cost-effective manor? How will they track and manage the expenses of these costly new treatments? With many potentially curative treatments approved with just a few months of follow-up, how will life-time effectiveness be assessed? What if the treatment that is supposed to last a lifetime only lasts a few years?

These drugs raise important questions. Prime’s integrated model can give plan sponsors a clear view of total costs. And our leadership in integrated care is the first step in managing through these exciting changes.