Approved biosimilars waiting on the shelf

This is part 2 of a 3-part series.  Part 1 of this series describes the differences in the regulatory pathways between generics and biosimilars. Part 2 of this series goes into the lag time between a biosimilar’s approval and its launch. Part 3 explains why biosimilar growth is not reaching its potential.

Since 2015, the FDA has approved 24 biosimilars for nine reference biologics. But only 12 of those had been launched, as of the end of 2019.

It’s a rocky road the manufacturer must take to get to market. When a biosimilar gets approved, why isn’t it launched right away? Why would a manufacturer hold it back?

The biosimilar manufacturer may invest $100 to $200 million, and eight to 10 years to prepare an abbreviated biologics license application (ABLA). (By contrast, a new generic might cost $1 to $5 million, and take just three to five years to win approval.)1

It’s not unusual to have ten or more manufacturers producing the same generic. But huge time and financial investments are required to produce a biosimilar. That means that only a few biosimilars will be produced for any drug class.

The biosimilar manufacturer often faces legal and patent issues, among others

Patent lawsuits. An original biologic often holds hundreds of patents. Its manufacturer often files lawsuits on behalf of many of those patents to delay the market launch of a biosimilar. Keeping a patent in force longer means more profit while manufacturer retains its exclusive market share. (And bonus – battling these lawsuits stalls the launch of an approved biosimilar.)

Rebates. This is when a manufacturer offers a pharmacy benefit manager (PBM) a higher rebate for a drug or a bundle of drugs. In exchange, the PBM doesn’t put the competing biosimilar on formulary.3 The original biologic keeps its favored placement on formularies. This makes the lower-priced biosimilar actually cost more. How? If one doctor prescribes the biosimilar to one patient, rebates dollars are withheld from thousands of biologic claims.

Didja hear about that biosimilar? Misinformation campaigns. Some manufacturers may mislead about the differences between the original biologic and its biosimilars. This discourages doctors and patients from moving to biosimilars.4

A look at these tactics in practice in the market

Both biosimilars show significant discounts over their biologic reference drugs. The Neupogen biosimilar was dispensed 68 percent of the time.

Remicade was dispensed 0.5 percent of the time. Almost not at all.

Mariana Socal, an ERISA study coauthor, and an assistant scientist in the Department of Health Policy and Management at the Johns Hopkins Bloomberg School of Public Health, called these results clear evidence of a rebate trap, and an indication that brand-name products were being offered more favorable placement on formularies.3 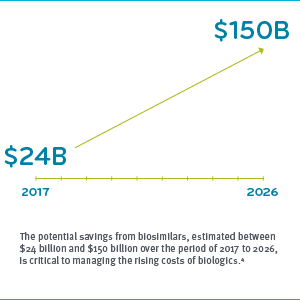 Just two of these health plans made biosimilars a preferred choice half of the time or more.5 These tactics are getting push back. In February 2020, the FTC and FDA announced new efforts to prevent these anti-competitive business practices, and to better support a competitive market for biological products.2

It wasn’t easy for generic drugs. Brand-name drug manufacturers resisted the influx of generics in every way they could. It wasn’t until 2002 that the percentage of generic prescriptions filled passed 50 percent. That was 18 years after the Hatch-Waxman Act.6

As Prime watches the drug pipeline, we monitor future developments in all drug classes and therapeutic categories. We leverage the latest outcomes-based information when making recommendations to our clients. We identify biosimilar savings opportunities — often well before they come to market.

3. Large employers could have saved money if more biosimilars had been prescribed, By ED SILVERMAN, April 2, 2020. STAT NEWS. Accessed at: https://www.statnews.com/pharmalot/2020/04/02/biosimilars-biologics-drug-prices-

5. “Biosimilars got the cold shoulder from health plans when it came to preferred coverage,” By ED SILVERMAN. STATNEWS @Pharmalot. MAY 20, 2020 Accessed at: https://www.statnews.com/pharmalot/2020/05/20/biosimilars-biologics-health-coverage-drug-prices/

Dispel the mysteries of the autoimmune drug category

One plan’s journey with gene therapy

Cell and gene therapies have been available for several years, but they are…